The Era of the Bond ETF Has Finally Arrived

by admin
in Wealth Management

(Bloomberg) — The inflationary tremors shaking Wall Street all year are causing big changes to fixed-income capital flows that could ultimately end up disrupting the money-management industry over the long haul.

Years after ETFs triggered a multi-trillion-dollar revolution in stock trading, bond investors are playing catch-up — liquidating cash from mutual funds and loading up on exchange-traded strategies at an unprecedented rate.

As cross-asset volatility breaks out with echoes of the pandemic tumult, traders are going all-in on the famously cheap and easy-to-trade products in order to navigate the great 2022 bear market.

Unlike mutual funds, which price only once per day at the market close, ETFs behave like a stock and can change hands throughout the session — an unrivaled trading advantage when Federal Reserve-induced gyrations rock global markets all day long.

“The Fed meets and tells the world at 2 p.m. what they’re going to do,” Sean Collins, chief economist at the Investment Company Institute, said in a phone interview. “With an ETF, you can respond immediately. With a mutual fund, you can respond at 4 o’clock.”

If the trend intensifies, expect loud noises from industry critics who fear ETFs are already creating liquidity and systemic risks — including distortions in the very assets they track, from stocks to corporate bonds.

An ETF fee war also threatens to rage anew as the likes of BlackRock Inc. and State Street Corp. battle for market share — broadening retail access to complex and risky debt trades on the cheap.

Another reason why the mutual-fund-for-ETF switcheroo matters: If the trend endures, passive strategies, historically the dominant approach in ETFs, may boom in popularity — amping up criticism that the industry is reducing price discovery in modern markets.

But how did we get here? Until now, the stickier nature of bond investments and the entrenched role of mutual funds in the pension industry effectively capped the allocation shift.

But this year, as the Fed’s battle against the highest inflation in four decades drives up cross-asset turmoil, more than $446 billion has been withdrawn from US fixed-income mutual funds, a record exodus in ICI data. About $154 billion has poured into bond ETFs instead, per the ICI — even as nearly every fund posts a loss.

Much of that influx to ETFs has gone to short-dated, cash-like products, and that may reflect a key difference between the type of investor using each structure.

Mutual funds tend to be popular with buy-and-hold savers making long-term decisions for retirement portfolios, Collins said. It’s that breed of investor who may have been most spooked by the losses, and who likely isn’t too fussed with the ability to trade multiple times per day. 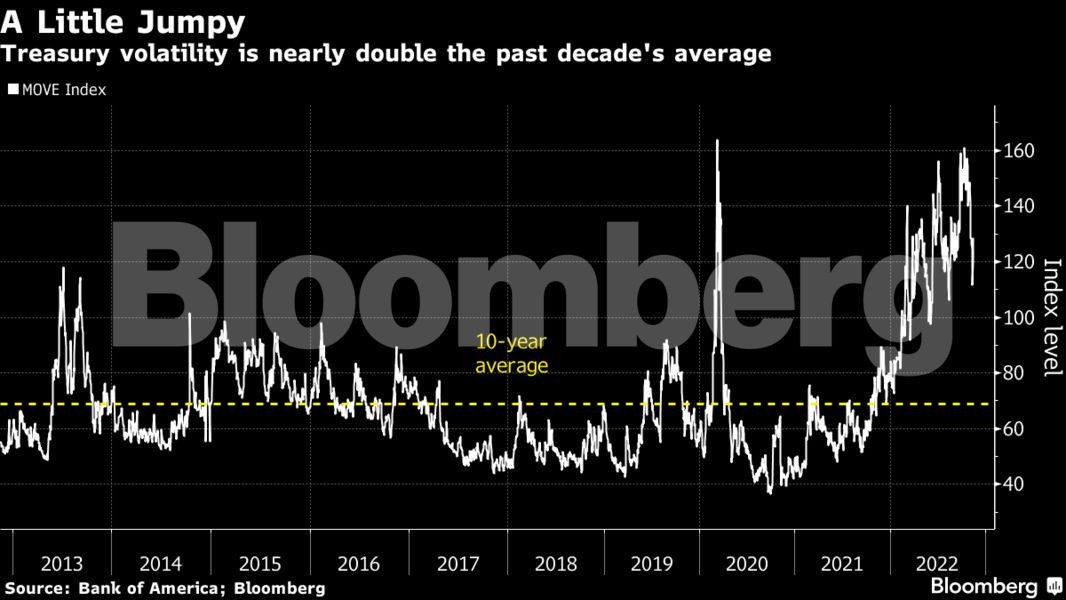 ETFs are heavily used by financial advisers, which likely helps explain a boom in cash-like ETFs, according to Morningstar’s Ben Johnson. More generally the products offer money managers a smart way to hedge portfolio positions or take directional bets on the cheap — a useful tool in this year’s volatile and macro-driven market.

“That’s a sweet spot for the advisor market,” said Johnson, Morningstar’s head of client solutions for asset management. “For advisors holding their clients’ hand, they can say, ‘If you’re really worried, we’ll take a little bit of risk off and park it in something that suddenly has a pretty respectable looking yield.’”

The ETF boom has been over a decade in the making, with investors pouring more money into the products than mutual funds for 11 years straight. Still almost all of that is down to equity strategies, which command over $5 trillion in assets versus less than $1 trillion 10 years ago.

Fixed-income mutual funds, by contrast, still dwarf their exchange-traded counterparts. Even after this year’s record withdrawals, ICI data show that roughly $4.5 trillion sat in old-school bond funds through September versus $1.3 trillion in ETFs.

The more-established structure retains a powerful incumbency advantage — for example because the US retirement system and 401(k)s are largely built to integrate mutual funds.

While the first fixed-income ETFs launched roughly two decades ago, the structure was long received skeptically by Wall Street, given that the funds trade much more frequently than the bonds they hold. However, the Fed’s decision to buy bond ETFs during the throes of the pandemic-fueled turmoil gave the vehicle an implicit stamp of approval that has helped fuel inflows.

Institutional acceptance is rapidly growing. Last December, the New York State Department of Financial Services changed its classifications so that insurance companies can now treat fixed-income ETFs as bonds for accounting purposes, instead of as equities — potentially opening the door to more adoption.

That was one of the factors cited by BlackRock Inc. when the giant money manager predicted assets in global bond ETFs will reach $5 trillion by the end of the decade.

Jillian DelSignore, head of advisor sales at fintech platform FLX Networks, argues that transparency is another key driver of the cash flowing to ETFs. They tend to disclose holdings daily, while many mutual funds typically reveal their portfolios just once a quarter.

“You’re shining a bright light on an inherently really opaque exposure,” she said. “There’s power in that.”