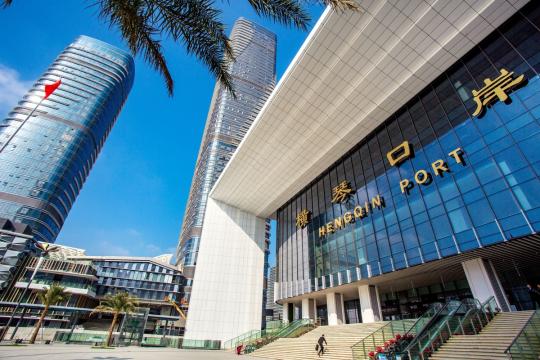 The new Hengqin Port between Macao and Zhuhai. (Photo provided to chinadaily.com.cn)

The central authorities’ new development plans for Qianhai, a special cooperation zone in Shenzhen city, and Hengqin, an island in Zhuhai city, both in the southern Guangdong province, are set to inject strong impetus into the next stage of high-quality development of the Guangdong-Hong Kong-Macao Greater Bay Area, officials said on Thursday.

They said the new plans mark the country’s latest move to further deepen reforms and opening-up, providing ample opportunities for the long-term development of the Bay Area.

Cong told a news conference in Beijing:”The expansion will be conducive to promoting institutional innovation and industrial upgrading in Qianhai as well as piloting the reform policies.

“After the expansion, the land available for industrial development will increase substantially in Qianhai. It will better leverage Hong Kong’s advantages, strengthen the cooperation between Shenzhen and Hong Kong, provide strong support for Hong Kong’s economic development and push the further integration of Hong Kong into the national development.”

According to the Qianhai plan, the total area of the cooperation zone will be expanded from 14.92 square kilometers to 120.56 sq km.

According to him, the NDRC will work with Guangdong, Macao and other relevant departments to formulate a catalog of industries that will be encouraged as well as a master development plan for Hengqin, to boost Macao’s economic diversification.

Specific policies have been employed for corporate income tax, individual income tax, import tax and tariff in the cooperation zone, according to Xu.

All industries conducive to the diversified economic development in Macao are eligible for the preferential corporate income tax rate of 15 percent, which is lower than the general level of 25 percent.

During the news conference, Pan Gongsheng, deputy governor of the People’s Bank of China, the central bank, said the central authorities will soon launch the Cross-Boundary Wealth Management Connect and start the southbound trading of the Bond Connect, which are new channels for investors in the Chinese mainland to buy financial products in Hong Kong and Macao.

The central government has launched pilots for residents in Hong Kong and Macao to open settlement accounts in banks from the mainland, and the scale and the settlement volume of the financial institutions will be further expanded, said Pan.

The central bank has taken measures to facilitate the use of mobile payments for residents in Hong Kong and Macao. New services include direct payment of cross-boundary electronic bills and self-service query of personal credit report, said Pan, who is also the head of the State Administration of Foreign Exchange.

In terms of green financial cooperation, the central bank is promoting local governments to issue green municipal bonds in Hong Kong and Macao, strengthen the cooperation between green bond evaluation and certification institutions in the Guangdong-Hong Kong-Macao Greater Bay Area. A green financial alliance will be established in the area, the central bank official said.