Employee discipline examples & how to handle them

Administering disciplinary action rarely tops the list of any manager’s favorite aspects of the job. Failing to address performance issues or unacceptable behavior, however, virtually guarantees it will continue. A lack of action also sends a bad message to the rest of the staff. Infractions may increase as people feel they can do whatever they wish without fear of repercussion, and morale may drop as employees witness a work environment where offenders go unchecked. Not to mention, leaders who fail to use their authority to tackle problems develop a reputation as ineffective or wimpy.

Conversely, some managers lean too heavily in the other direction. Whether out of desire to establish their authority, run a tight ship, or weed out less stellar performers, they jump at taking corrective action. But problems can arise if the punishment does not fit the crime or if steps in the company’s discipline process get ignored. Such behavior makes current employees nervous and confused, and former employees who feel improperly terminated may take legal action.

How can managers take proper disciplinary measures? Here’s a basic look at the disciplinary process followed by examples of employee discipline in various scenarios.

Employee discipline policy varies by organization. Know exactly how your organization handles everything from tardiness and dress code to serious offenses such as stealing and sexual harassment. Learn, too, any specifics that affect the disciplinary procedure. If, for instance, you are disciplining an employee who belongs to a union, a representative from that group may need to sit in on meetings or sign off on paperwork.

While human resources often supplies managers with disciplinary policy guidelines and templates, a great source of information is the employee handbook. Managers familiar with its content can use the employee handbook as a point of reference. The ability to show a worker exactly what rule he has broken and what consequences follow helps ensure consistent, fair treatment for all.

Many companies follow some type of progressive discipline policy. This notification structure provides various levels of warnings that increase in severity if the employee does not change his ways. The blueprint of how violations get handled proves helpful to both managers and team members. Everyone is privy to expectations and procedures, which reduces guesswork and surprises.

Exact set-ups vary, but progressive discipline tends to include the following:

This early step involves making the offender aware that a problem exists. A manager discusses behavioral issues, poor performance, or other situations the employee must rectify. The two sides often talk about solutions and what consequences happen next if improvement does not occur.

While a verbal warning happens as a conversation, managers often write down the date of issuance and the reason for the warning. They may require an employee signature acknowledging the discussion. Depending on company policies, this documentation may not need to go into the employee’s file. Instead, the manager may just keep it in her own records unless problems escalate. 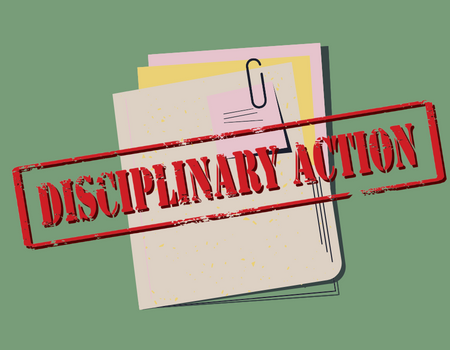 Write-ups typically display a greater concern about employee behavior or employee performance. Workers realize the manager is not “just talking” and intends to follow through on stated disciplinary action for failure to meet expectations. The human resources department often enters the mix, and a paper trail becomes part of the person’s personnel file. At many places, managers fill out written reprimands via templates to ensure all relevant information and proposed action gets documented. Companies vary in the number of written warnings allowed before issuing a final written warning as the last straw before dismissal.

A PIP is a special type of written notice to help struggling employees take corrective action. While all written warnings usually contain some mention of proposed ways to improve, a PIP does this in greater detail. As a plan, it goes beyond a list of wrongdoings. Instead, it requires metrics that clearly define what improvement looks like and sets a time frame for meeting conditions.

Dismissal can result if other disciplinary measures fail. Note that most disciplinary policies include provisions to skip immediately to this step for serious offenses such as theft, violence, sabotage, or sharing proprietary information.

What might a disciplinary process look like in action? Much will depend on the company’s policies, the offense, and the improvement (or lack of it).

Here are some sample cases:

After noting Helen has been late three times over the past two weeks, her manager calls her into his office. He explains the importance of all employees being ready to work at their scheduled time. Helen explains that she sometimes misses the earlier bus but did not think it was a big deal to be a bit late because she cuts the time off of her lunch. Her manager explains that workers cannot create such adjustments without permission, asks her to report daily at the proper time, and tells her that a write-up will occur should tardiness remain an issue. Helen heeds the verbal warning, and nothing about the incidents goes into her employee file.

John’s manager has told him several times to put away his mobile phone at all times other than during breaks. John has ignored these requests, so his manager does a write-up when he once again finds him texting on company time. The manager fills out a company-issued template:

Type of Problem or Violation:

Details of occurrence: On December 18, Mr. Anderson was on his personal phone for 15 minutes rather than helping coworkers unload a shipment. Not only does this action put an undue burden on the team, it violates the rule of no mobile phone usage anywhere but in the lounge during a scheduled break. This rule is stated in the employee handbook, which Mr. Anderson signed off as having read during his onboarding process. I have had two previous conversations with him (Nov. 12 and Dec. 2) about the need to put the device away while working. He did not heed these verbal warnings.

Expected improvement: My expectation going forth is no further incidents of phone usage anywhere but in the designated spot at the proper time. If Mr. Anderson has questions, he should consult me or human resources for guidance. Failure to abide by the stated policy will result in a day’s suspension without pay, as outlined in the handbook’s section on consequences for repeat offenses following a written warning.

I have read this warning notice and understand it.

Human resources will place a signed copy of this document in the employee’s personnel file.

Unfortunately, John does not heed the written warning. When his manager once again catches him scrolling on his phone, the company has no choice but to follow through with the stated consequence. John’s manager also fills out another write-up as a second warning, this time spelling out that recurrence will result in termination.

Thomas has a reputation as someone who never holds back his opinion. His manager has mentioned to him several times that while she respects his right to his own ideas, he needs to present them in a civilized manner in the proper setting. She also verbally warned him that the company expects employees to follow its set procedures.

At a staff meeting, Thomas hits the roof about a new policy. He yells that the CEO is a moron and that all the managers are his mindless minions. He tells his coworkers he won’t be going along with this nonsense and encourages them to do the same.

This outburst prompts his manager to compose a letter of reprimand:

This letter of reprimand serves as a written warning for your act of insubordination at the staff meeting on June 14. As we have discussed before, there are proper times, places, and manners in which to express your opinions about company policies. This outburst — which included name-calling and openly urging your colleagues to not listen to their supervisors — was unacceptable.

As stated in the employee handbook — which you acknowledged receiving and reading during onboarding — ABC Limited expects professionalism from its employees. Please immediately reread the section on the company’s code of conduct.

My expectation going forth is no further incidents of insubordination. If you have questions, please consult human resources for guidance. Failure to abide by the policy will result in a day’s suspension without pay, as outlined in the handbook’s section on consequences for repeat offenses following a written warning.

Please acknowledge receipt and understanding of this warning letter by returning a signed copy of it to human resources by June 19.

Jackie’s boss at the real estate agency at which she works has pointed out several times the need for accuracy. Mistakes in documents anger clients and could have serious legal or financial repercussions for the small business. After Jackie accidentally puts down the wrong address on an open house announcement, her manager decides a Performance Improvement Plan is in order.

Along with a recap about what prompted the PIP, the document contains instructions on what Jackie will need to do going forth. It also provides information on what the company can do to assist. It is determined that Jackie will work under the supervision of a seasoned employee for two weeks. This mentor will show Jackie the steps she personally uses to double-check paperwork. Then, Jackie will employ these tactics herself going forward. She also will meet with her boss after 30 days to examine progress. If errors remain a problem, the PIP states that Jackie will receive a demotion.

Anne is in charge of the department’s travel fund. She recently denied someone’s travel request because she claimed the account lacked sufficient money. This person mentions it in passing to a colleague and discovers the same situation happened to this employee a few months ago. The two workers meet with their boss in private to discuss the matter. After going through some paperwork, the boss finds a variety of inconsistencies. When he asks Anne about them, she gives very vague answers. Digging deeper, the boss accumulates enough proof to determine Anne is putting through false claims for her own benefit.

The severity of this misconduct leads her boss to bypass the progressive discipline process. Instead, he consults with human resources and the organization’s legal team. Anne receives a termination letter stating her immediate dismissal and the reason behind the decision.

Trying to Do Everything Is Slowly Killing Your Business

Is virtual care delivering on its promise of improving access?

E-commerce is entering a new phase in Southeast Asia. Are logistics players prepared?

What to expect from China’s travel rebound