There’s nothing like revealing your political views to coworkers to really get the blood pumping. It is, without a doubt, one of the most exciting and inflammatory things a person can do at work, which is probably why we’re advised to take political debates elsewhere. These conversations are messy and filled with opinions, making them a hotbed for heated arguments, hurt feelings, and injured reputations.

If you follow social media much, you’ve probably witnessed the banning or suspension of someone’s account for inappropriate or offensive conduct. “Free speech!” they and their supporters cry out. “This is censorship!” to which opponents reply, “the First Amendment doesn’t apply to private companies.” I know, I know, it’s getting old, but it’s true. Private employers—including your employer—are not bound to the same laws as our government when it comes to free speech. While your boss can’t lock you up for saying the wrong thing, human resources might invite you up for a chat if your political beliefs are disrupting working relationships with coworkers.

Naturally, this scares people into avoiding the topic completely, even when frank political discussion is desperately needed. For example, if you witness discrimination at work, the right thing to do is to raise a complaint. You may feel like you’re toeing the line of what’s politically appropriate in the private sector—after all, human rights are political at their core—but avoiding the conversation could lead to a hostile work environment no one wants to be part of.

So what’s the right way to approach it?

Believe it or not (and it’s easy not to), most of us want the same things. We want happiness and safety for ourselves and our loved ones. We want recognition for the good things we do and forgiveness for the times we don’t measure up. We want healthy relationships with others, including coworkers of differing political affiliations.

Unfortunately, differences (or ignorance) can drive major wedges between people, so most of us proceed with caution so as not to cross any boundaries and hurt working conditions.

The essence of political disagreement is this: Our views come from the deepest wells of what we believe to be good, which is why hearing someone disagree with them can feel at best confounding and at worst devastating. Even infuriating. Here you are supporting the good political party in an election year and along comes somebody else telling you it’s bad. How dare they…

When approaching these chasms of conflict, a great bridge is to ask questions, and there’s no better way to start a question than this:

“Do I understand you correctly?”

Rather than accusing them or saying their viewpoints are wrong, repeat them back the way you understand them and ask for clarification. Not only does it put you in their shoes for a moment, but it also keeps them from backpedaling and becoming defensive, both of which lead to escalated arguments.

Consider the practice of asking more questions. It’s a different way of thinking that not only offers you a chance to learn new things, but also to open up and be vulnerable. A sincere question reflects your inner thoughts and feelings, giving others a closer look at who you are—a much more effective means of political expression than hurling accusations.

Most people simply don’t ask questions. Whether out of fear or a false sense of confidence, they take little time to understand others’ points of view and then chalk up differing political opinions to everyone else being crazy or lacking common sense. Harmless as it may seem, it isn’t.

On the other hand, genuine conversations with people who don’t share your views broaden your appreciation of the many complex lives bustling around you every day. If you find yourself hurtling toward hot-button political talk, slow things down by asking questions.

Acknowledge that others operate differently 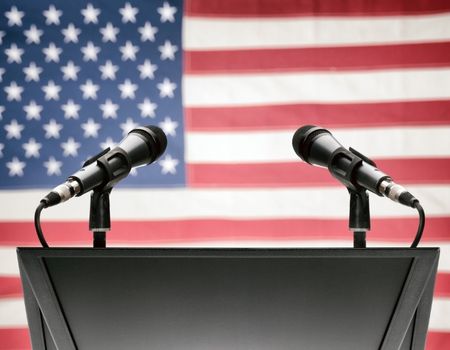 Another reason politics can be treacherous in the workplace is that each of us has different needs. Politics offers a way to participate in and (hopefully) improve our communities to better meet those needs, but the cost of entry includes granting everyone else the same right.

History is full of battles over whether a need is important or even legitimate. Take the Americans with Disabilities Act (ADA), for example. Until 1989, people with disabilities confining them to a wheelchair simply couldn’t take interstate bus rides because bus lines weren’t equipped to carry them. Greyhound Bus Lines even fought these changes, using rhetoric that the cost to modify their buses would only deprive countless others of affordable transportation.

Thankfully, the ADA passed. We take for granted today that most buildings and businesses accommodate wheelchairs, just as future generations will take for granted some other human right not yet enumerated. Overall, society is better off when we find ways to include people whose needs aren’t being met, and it starts with listening to what others need.

This aspect of political discussions can be challenging. It’s easy to write off someone else’s needs when you don’t understand them. Some people make ignorant, hurtful blanket statements about others and their unique circumstances without realizing the pain they cause. While it may feel political to contest hurtful comments, ignoring them is not an option.

A good rule of thumb, especially in the business world, is to take people at their word without disputing their sincerity. Rarely is someone “faking it” or “trying to get attention.” Seeking this kind of underlying meaning by examining each statement for flaws is not only counterproductive, but a waste of time.

Again, human rights and related issues are political by nature. Each of us has a place in the world and all its different experiences. If someone disputes another’s right to exist just the way they are, a political conversation is a way forward.

Stand up for what’s right

There are certain things we can all agree are simply wrong in the workplace. Physically threatening someone, making unwanted sexual advances, or discriminating against someone due to their ethnicity are all unconditionally wrong things to do at work, or anywhere for that matter. If you witness these things, it’s easy to recognize them as wrong and decide what to do next.

But then there’s a gray area. This might be clothing with offensive messaging that, while inflammatory and irritating, isn’t going to be read by everyone. It might be huffing in disappointment at someone else’s comments. Many times, it’s the beginning of a thought that gets cut short once the person saying it realizes it might not be a safe thing to utter. As the observer, the polarization is there, but it can easily be written off as just water cooler chat.

In these cases, you may want to take them aside and discuss things in a more private setting. Addressing it in a large group will only make them defensive, but doing so privately might open them up to your concerns. Delicate conversations take time to work through, and ignorance is stubborn. While people can and do learn and grow, it’s sometimes thanks to others’ courage and kindness.

This isn’t The Taming of the Shrew—no one has a duty to target politically underdeveloped people and tutor them into becoming steadfast moral giants. If someone at work is indirectly expressing a harmful idea, though, it’s probably worth discussing it with them to avoid things getting worse.

The rights of workers

Another political issue is the rights of workers. Concerted activity—employees’ right to band together and negotiate for their own interests—is protected by employment law, yet many avoid talking about it at work for fear of serious consequences. Sometimes, these discussions pop up outside work, posing the risk of word getting back to the boss that you know a little too much about the National Labor Relations Act.

It’s important to know that while many companies make the news for going to great lengths to fight unionization, it is nothing close to illegal to talk about teaming up with coworkers to ask for better working conditions.

Wrongful termination laws protect workers from being fired for simply having a particular opinion. It’s unfortunate that employers have become afraid of unionizing to the point of making illegal termination threats. However, employees have rights, and they are enforceable by the National Labor Relations Board.

Unions aren’t the only topic perceived as dangerous in the workplace. Your company culture may carry a certain political climate you don’t agree with. While you could be terminated for constantly inciting political arguments, doing your job and keeping your opinions to yourself—even if others consider them wrong or harmful opinions—is not a workplace violation.

It’s a double-edged sword that tends to favor whoever’s in the opinion minority. If you work in a more left-leaning community, those with right-wing views are protected from being terminated for simply voting differently, and vice versa.

This article aims at dealing with political discussions in the workplace, but it bears mentioning that you don’t have to have them if you don’t want to. If you’re asked to weigh in on something where your answer might put you in a vulnerable position, simply say, “I don’t want to talk about it.” No need to explain yourself, just let people know you aren’t interested in this particular discussion.

Don’t be a jerk

Sometimes when you know you’re right about something, all the words come out just right. You remember citations, defend yourself perfectly, and truly dominate the other person’s position. All you need at the end is one perfectly snarky zinger to blast your interlocutor into outer space. Listen: Don’t do it.

No one likes to lose in an argument, especially when doing so exposes their ignorance. They’re going to be embarrassed no matter what, but if you fire off an insult, they’ll just get angry, at which point it’s bad for everyone in the office. Rather than moving past the conflict, personal insults cause walls to go up that stall growth. Instead of pausing to reflect on why their position couldn’t make sense, they’ll harbor resentment and do anything to avoid siding with you.

If you feel tempted to make a personal insult during a political [or any] argument, that’s the time to excuse yourself and get back to work. There’s a lot of rhetoric about being nice at all costs, and sometimes it’s plain wrong, but civility is important. Wielding an intelligent position without donning the petulant laurels of elitism is something this world is deeply lacking. Arguments don’t have to be fights, just like opinions don’t have to be facts.

Some political discussions are a waste of time. Others are a great opportunity to build relationships and grow. Most times, no minds are changed, so don’t feel too disappointed at proving someone wrong only to hear them repeat the same opinion tomorrow. It happens. The best way to handle it is to create a space where opinions are welcomed with mutual respect, but always up for debate.

Cheaters Are Everywhere. To Survive, Leaders Must Stay One Step Ahead.