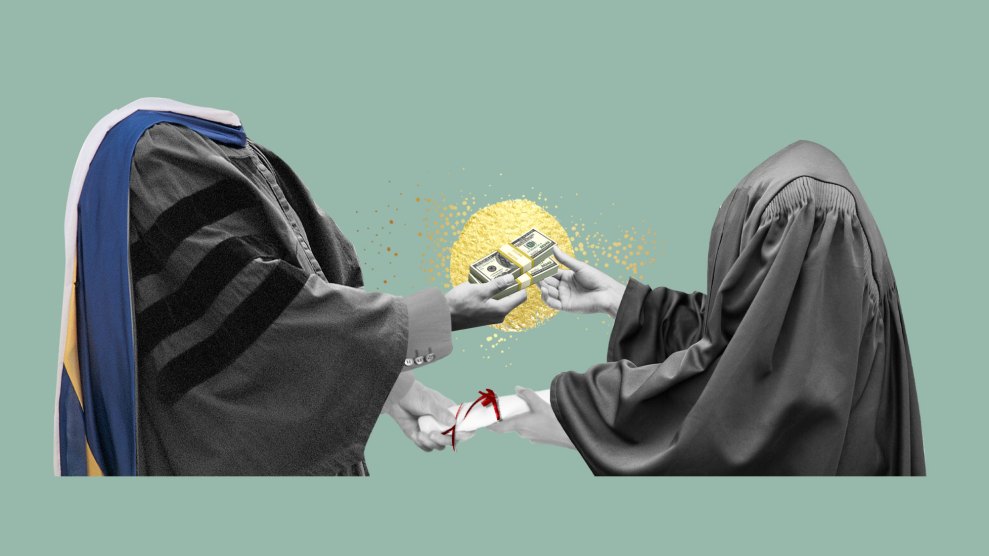 Fight disinformation. Get a daily recap of the facts that matter. Sign up for the free Mother Jones newsletter.

The first trial of the Operation Varsity Blues scandal—wherein dozens of wealthy and prominent Americans were indicted for allegedly cheating and bribing their offspring into elite universities—wrapped up this week. The fates of two defendants, John Wilson, a private equity executive, and Gamal Abdelaziz, a former casino big shot, were handed over to a jury. Defense lawyers suggested these two rich, hapless clients did nothing wrong besides playing a game everyone knows is rigged in favor of students from wealthy families. Abdelaziz and Wilson claimed they’d been led to believe they were making legitimate donations to the institutions in question. They were just victims!

Only in a nation with such egregious disparities in higher education might a jury accept such an argument. Indeed, whenever a scandal erupts wherein the greedy rich are seen as participating in criminal acts to maintain their privilege, status, and wealth, it is invariably accompanied by a sub-scandal acknowledging what the wealthy can get away with every day without breaking the law.

To the degree upward mobility exists in the United States, it hinges on higher education. The financial payoff of a college degree is indisputable. As of mid-2020, Americans 25 and older with a bachelor’s degree or better earned median pay 80 percent higher than those with just a high school diploma. The earnings bump is considerably larger for graduates of Ivy League and “Ivy-Plus” schools—the traditional Ivies plus the University of Chicago, Duke, MIT, and Stanford. These colleges tend to be the most efficient mobility engines, according to a 2017 study from the National Bureau of Economic Research. But to catch that train, a student has to get in and through.

That’s where the rich enjoy a huge advantage. The Ivy-Pluses, the same researchers found, enrolled more students from top-earning 1 percent families than from the entire bottom 50 percent. What’s more, children of 1 percenters were 77 times more likely than the children of bottom quintile families to attend an Ivy-Plus college.

The sources of these shocking stats range from differences in parental spending during early childhood to the ability of affluent parents to pay for high-end prep schools, enrichment activities, private tutors, SAT coaches, and college counselors. The disparities also have to do with college affordability, a proliferation of student debt, and the fact that the rules governing federally subsidized college savings accounts favor wealthy families.

Then there’s the legacy system. A 2018 survey of admissions directors by Inside Higher Ed found that 42 percent of private colleges and 6 percent of public ones gave an admissions boost to children of alumni and sometimes to grandchildren and siblings, too. A handful of top institutions have rejected this tradition but many cling to it jealously, including most of the Ivy-Pluses and schools like Notre Dame, the University of Virginia, and the University of Southern California, which calls its legacies “scions.”

The first-year classes at legacy schools typically consist of 10 percent to 20 percent descendants of alumni—rivaling and sometimes exceeding the enrollment of underrepresented racial groups. A survey of Harvard’s class of 2019 by the school paper, the Crimson, found that 28 percent of incoming first-years had one or more alumni relatives, and nearly 17 percent had at least one alumni parent. More than two-thirds of the direct legacies reported that their families earned at least $250,000 a year, and 43 percent said their parents earned at least $500,000.

For Harvard’s classes of 2000 through 2019, one analysis found, average acceptance rates were about 34 percent for legacies vs. 6 percent for nonlegacies.

For the classes of 2000 through 2019, Harvard’s average legacy acceptance rate was about 34 percent, compared with 6 percent for non-legacies, according to an analysis commissioned by the anti-affirmative-action group that sued Harvard, claiming it discriminates against students of Asian descent. (The group lost its case but has appealed to the Supreme Court.) At Stanford, the legacy admissions rate has been about three times the nonlegacy rate.

The legacy system has nothing to do with merit, of course, and everything to do with the fact that legacies and their families are viewed as likely donors. In his book The Price of Admission, the Pulitzer Prize–winning journalist and author Daniel Golden notes that elite private colleges, as a condition of their tax-exempt status, are prohibited from engaging in racial discrimination, yet the legacies who suck up slots at the expense of other qualified students are overwhelmingly wealthy and white.

If parents can afford to fund construction of, say, a new building wing, that would further boost their children’s chances of getting in. Children of major donors often end up on the dean’s or director’s “interest list.” This is better than being a legacy. The analysis commissioned by the group suing Harvard found that 42 percent of kids on the dean’s list got accepted—seven times the normal acceptance rate.

While researching his book, Golden learned that the New Jersey real estate mogul Charles Kushner had pledged $2.5 million to Harvard, payable in $250,000 annual installments, around the time his son Jared was applying. “His GPA did not warrant it, his SAT scores did not warrant it,” a former official at the younger Kushner’s private high school told Golden. “We thought for sure there was no way this was going to happen.”

But Jared was accepted, graduated from Harvard in 2003, and ended up working for his father-in-law in the White House. The elder Kushner’s gift was tax-deductible. “Is that really a gift?” Golden asked Vogue rhetorically. “Or is that a purchase of a good or service?”

Ivy-Plus colleges were the most likely, researchers found, to propel bottom-quintile students into the top 1 percent.

The situation is no different for ultra-rich liberals. A well-to-do friend whose daughter attended Cornell told me he finds the legacy system appalling, but the school’s alumni come up with all kinds of ways to rationalize it. As I did research for my own book, in fact, a wealthy source told me that if a billionaire is willing to donate a building to get his kid into a top college, he didn’t have a problem with that. Didn’t the utility of having that building for the benefit of all the students, rich and poor, more than make up for the inequity?

There’s a logic to that argument, but try telling it to the lower-income kid who sacrificed their childhood in pursuit of an Ivy League…