An overwhelming majority of Americans agree the nation’s democracy is in trouble, but Democrats and Republicans seem to be living in two separate realities when it comes to what — and who — is putting the country at risk, according to the latest PBS NewsHour/NPR/Marist poll.

Eighty-one percent of U.S. adults say the future of U.S. democracy is under threat, a sentiment shared by most Republicans, Democrats and independents. But when they were asked which party poses the bigger risk, it was a statistical tie between people who said the Democratic Party (42 percent) and the Republican Party (41 percent). An additional 8 percent of Americans blame both parties for playing a role.

“We have one point of bipartisan agreement that the ship is sinking,” said Edward Foley, who directs the election law program at Ohio State University. “But the problem is that each side blames the other for the ship sinking.” 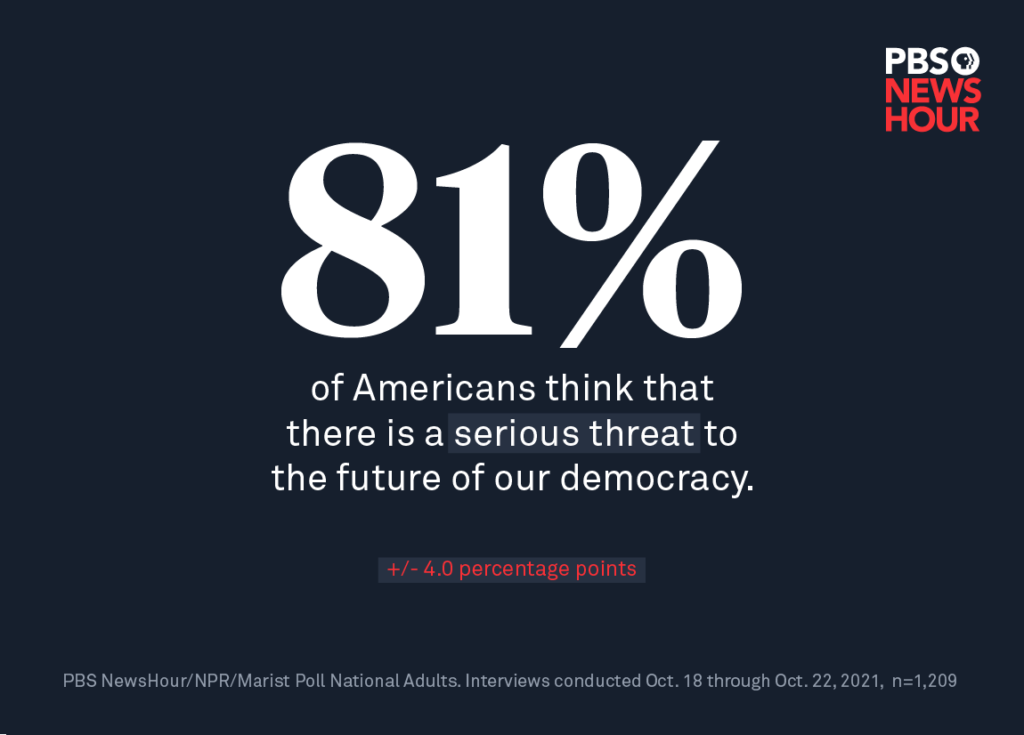 As a handful of states hold key elections this week and the nation heads toward the 2022 midterm election cycle, Americans’ varying confidence in the mechanics of democracy suggest the consequences of years of divisive politics, misinformation and attempts to restrict voting. “Our democracy is at risk, and I’m very worried about that,” Foley said.

For months and with no evidence, former President Donald Trump maligned secure voting systems, such as mail-in and drop-off ballots, and attempted to lay claim to an election he did not win. His own attorney general, William Barr, said there was no evidence of widespread voter fraud in the 2020 election. Elections officials called it the most secure presidential contest in U.S. history, But Trump’s words still ring in the ears of many of his supporters.

In this latest poll, about two-thirds of Americans say Trump has made these claims about the election simply because he didn’t like the outcome. But a third of U.S. adults, including three-quarters of Republicans and 26 percent of independents, say Trump is mostly right in his continued calls that the election was rigged.

“It’s really worrisome that we have this degree of misunderstanding of basic facts of the democratic process,” Foley said. 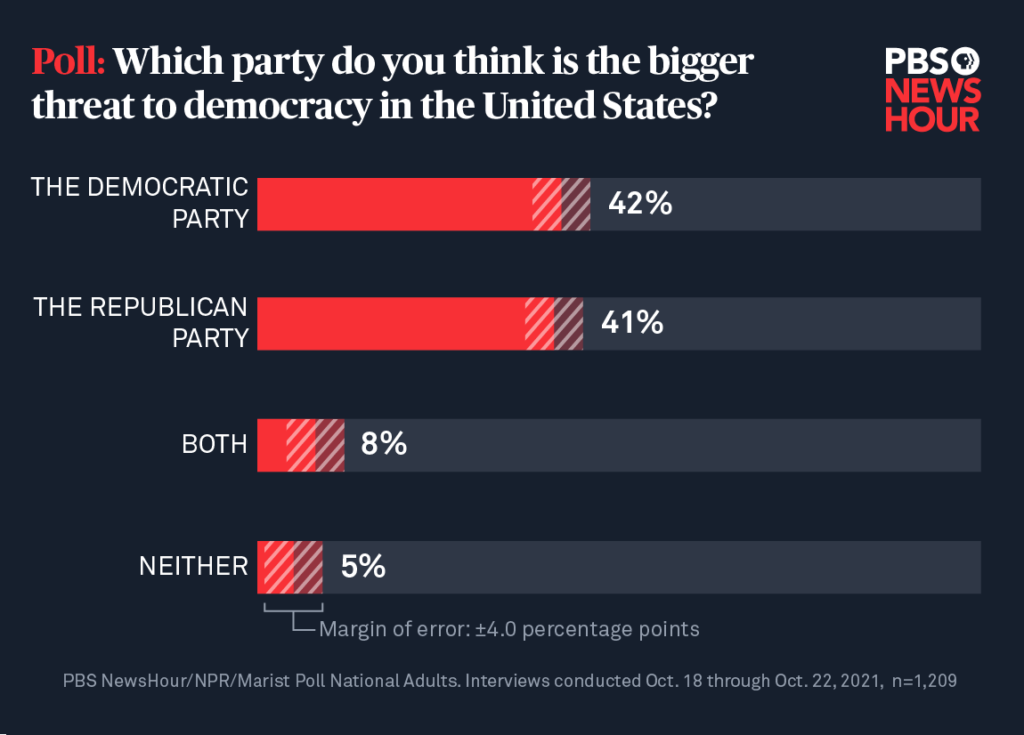 Despite some people’s misgivings about voting integrity, seven out of 10 Americans trust their state and local governments will conduct fair and accurate elections going into the 2022 midterms, and say they will accept next fall’s election results, even if their candidate loses. But within those numbers, political lines reemerge — while 88 percent Democrats said they would accept their candidate’s loss, the percentage fell to 53 percent of Republicans.

While an overall minority of U.S. adults, 37 percent, say they have lost confidence that their state or local government would conduct fair and accurate elections, that number was notably high among certain groups — 60 percent of Republicans, more than a third of white Americans and 41 percent of Latinos said they felt that way. In contrast, 43 percent of Americans said they now have more faith in the electoral process, including 55 percent of Democrats and 59 percent of Black Americans.

These broad trends of voter confidence distributed along racial lines have been echoed elsewhere. In a Jan. 12 survey conducted by the Pew Research Center, 88 percent of Black voters approved of how the 2020 election was administered, significantly more than 68 percent of Latino voters and 53 percent of white voters.

“Broadly, these racial and ethnic differences reflect the partisan preferences of these groups,” the survey authors wrote.

One of the most high-profile election fights of 2020 unfolded in Georgia, a traditionally red state that flipped for the Democratic Senate candidates and President Joe Biden. Multiple investigations and audits there have found no evidence of widespread voter fraud. In this latest poll, 29 percent of Americans, including 55 percent of Democrats, said voter suppression posed the biggest threat to U.S. elections, while another 21 percent of Americans, including 34 percent of Republicans, said it was voter fraud. And 18 percent of Americans think vote tampering by the opposing political party is hurting democracy. Republicans were about twice as likely as Democrats or independents to suspect vote tampering.

Republican Charles Burke, a 52-year-old resident of Canton, Georgia, said he voted for Trump by going to a fire station, casting his ballot, showing his driver’s license and writing his signature to verify the results. Everyone should vote in person, with the exception of the military and people overseas, he said, adding that he doesn’t trust mail-in or drop-off ballots, especially in Georgia.

“It was just strange to me how the Democrats won because it was a lot of the drop-off ballots that were counted late at night that pushed everything over the top,” Burke told the PBS NewsHour. In late March, Georgia Republican Gov. Brian Kemp, a staunch Trump ally, signed a new law that placed greater restrictions on absentee voting in the state.

READ MORE: Why election integrity and voter trust are in the spotlight in Fulton County, Georgia

Chris Tosto, a 23-year-old resident of Atlanta, said that even though most of his friends are Republicans, he cast his vote for Biden. He said he made that choice because the Democratic Party laid out proposals to improve people’s lives, while Trump supporters attended rallies that resembled sporting events. A year later, politics are increasingly polarized, he said, and politicians are competing with each other to catch voter attention with “views that are more out there.” People are paying attention.

“I know people to this day who will just randomly out of the blue say the election was rigged with recounts,” he said.

But political lines quickly emerge when Americans think about the next presidential election in 2024, 62 percent, including 82 percent of Democrats, said they would trust the results as accurate, even if their candidate did not win. But only a third of Republicans said they could have faith in the results. 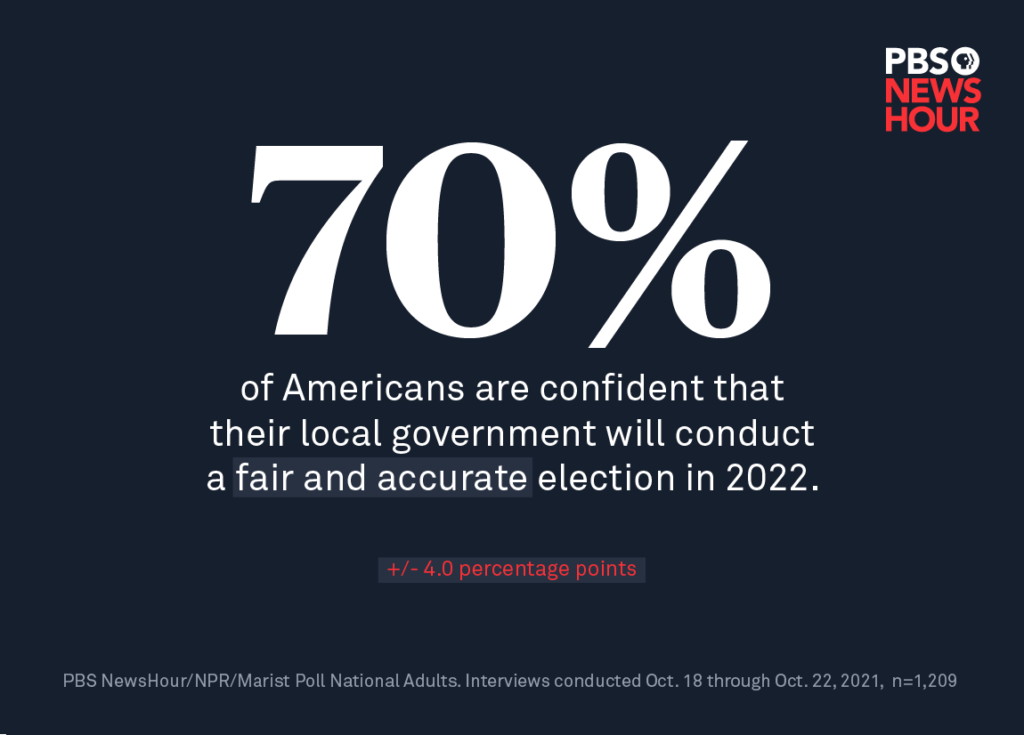 Seventy percent of Americans and a majority of Republicans — 56 percent — agree that a candidate who loses an election but refuses to concede does more harm than good for democracy. But Republicans are about twice as likely as Democrats (24 percent versus 10 percent respectively) to say those candidates offer more good than harm for democracy.

“Democracies don’t work if losers don’t consent,” Foley said. “Your side can’t win every election, and neither can the other side.”

In her office, Natalie Adona has watched American faith in democracy shift in real time. Assistant clerk recorder and registrar of voters for Nevada County, California, Adona said most people in her community know each other and are civil to her…

Read More: As Election Day nears, most U.S. adults say future of democracy is under threat